How Christianity structures the Year

Christian feasts have served as the foundation of Austrian culture for centuries. The borderline between secular and religious customs is not always easy to draw.

How Christianity structures the Year

Christian feasts have served as the foundation of Austrian culture for centuries. Many of them are rooted so deeply in Austrian tradition that many people celebrate them without even remembering the religious origin. Many Christian feasts are also public holidays in Austria, which means people do not work or go to school on these occasions.

In winter, on December 25th, Christians celebrate the birth of Jesus Christ, called ‘Christmas’. This celebration is of great importance for Christians because it marks the moment when, out of such great love for us, God became a human being. The Bible reports that Mary gave birth to Jesus in Bethlehem and laid him in a manger because there was no room for them in the inn. Christians prepare for the feast over a period of four weeks, which is called Advent. In Austria, we begin our celebrations on the evening of December 24th, Christmas Eve. Apart from the Christmas tree (a decorated conifer) people have mangers with figurines of the newborn Jesus, Mary, Joseph and the adoring and marveling
shepherds of Bethlehem. 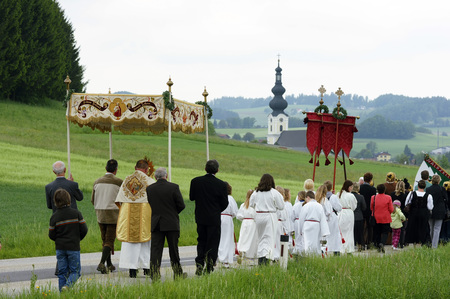 The Sacred Scriptures say that wise men (astrologers) from the East came to see the child and bring gifts. Therefore, after New Year's Day, many children dress up and visit every house as carol singers, called "Sternsinger", to collect money for people in need all over the world.

In spring Christians celebrate Easter – the most important Christian feast. Throughout the season of Easter, we celebrate the resurrection of Jesus. The more than six weeks of preparation time for the feast, called “Lent”, are a time of fasting and prayer for Christians who wish to undergo a purification. Christians handle this in a very individual way - in public life fasting does not play a prominent role.

Forty days after Easter Sunday, the faithful celebrate Ascension Day, the ascension of Jesus to heaven. However he did not leave his Disciples on their own, but sent them the Holy Spirit as a c onstant companion, which is celebrated 10 days after that
at Pentecost.

Another ten days after Pentecost, Catholics celebrate Corpus Christi, which means ‘body of Christ’. They celebrate the real presence of Jesus Christ in the bread consecrated during holy Mass. The ‘Corpus Christi’ is afterwards carried through the streets to demonstrate that God is still with us today, is close to us, and blesses us.

Three Marian festivities are public Austrian holidays: the Solemnity of Mary, the holy Mother of God, on January 1, the Assumption of the blessed Virgin Mary on August 15 (the assumption of Mary into heaven in flesh in miraculous completion of her life on earth) and the Immaculate Conception on December 8 (we celebrate that Mary was chosen right at the beginning of her life to become Jesus’ mother).

On November 1st ,All Saints' Day, the Catholic Church remembers all saints, i.e. all people who lived holy lives and died in God's friendship. One day later, on November 2nd ,All Souls' Day, we remember all those who have died. During these days (November 1st is a public holiday) many people visit the graves of their deceased relatives.

Very popular among Austrians are Saint Nicholas and Saint Martin of Tours. On December 6, children receive sweets in memory of the generosity of St. Nicholas. A folk custom is that Nicholas is accompanied by Krampus, an incarnate, monstrous depiction of evil in opposition to the good of St Nicholas.

Thanksgiving is a folkloric feast with religiousprocessions and special decoration of the churches. The churches celebrate this feast on a Sunday inautumn, mostly at end of September/beginning ofOctober. People thank God for the fruit of the earth and, especially in the cities, for the work of human hands.

The borderline between secular and religious customs is not always easy to draw. There are customs like hiding eggs at Easter time, Easter bonfires or the Christmas tree, which traditionally make up a part of Christian feasts, but many people are not aware of their Christian roots anymore. Austrian culture has had many influences apart from Christianity, continues to absorb new influences and keeps evolving. Most Austrians, however, appreciate the lifestyle, the customs, the feasts and celebrations that have emerged under the influence of Christianity over many centuries. Usually they are open to new developments, but people coming to Austria are expected to respect the Austrian culture, which is shaped by Christianity. It means home to them – and it might also be home to people from all over the world.

More articles of the brochure